Douglas M. Long, MBA, vice president of Industry Relations for IQVIA, surveyed COVID-19's effects on the pharmaceutical marketplace as he kicked off AMCP eLearning Days, a webinar series held in place of the annual meeting of the Academy of Managed Care Pharmacy (AMCP).

The global pandemic of coronavirus disease 2019 (COVID-19) has wreaked havoc on every part of the pharmaceutical business, from purchasing patterns to drug launches, and the upheaval will continue when Medicaid enrollment booms, according to an industry expert.

Douglas M. Long, MBA, vice president of Industry Relations for IQVIA, surveyed the pandemic’s effects as he kicked off AMCP eLearning Days, a webinar series held in place of the annual meeting of the Academy of Managed Care Pharmacy (AMCP), which was canceled due to COVID-19.

Telemedicine’s explosion and the increased authority given pharmacists to help patients during the crisis could be positive changes that last, Long said. But his review of data shows that lockdowns and social distancing have been mostly disruptive to the healthcare system, and some players may not survive.

COVID-19 hit amid a period of overall good news for biosimilars and generics. These drugs were making an impact in the marketplace prior to recent lockdowns, and Long says they are much needed. Overall drug spending was up 4%, but the annual spike was 11% in specialty pharmacy and just 1% in traditional drugs.

Specialty sales had just about approached 50% of the market when the virus hit. Most of the late-stage pipeline growth is fueled by specialty and what Long called “niche” therapies. Long’s data show that 88.7% of prescriptions are to be dispensed as unbranded generics for 2020; unbranded and branded generics account for 20% of spending. In the past decade, he said, generics and biosimilars have saved $96 billion.

Last year saw a record number of biosimilar approvals, but many of these products do not launch. “We are going to need specialty generics and biosimilars if we are to hold down spending going forward,” Long said.

Use of biosimilars in oncology “is starting to hit a critical mass,” he said. However, the focus on drug prices—or at least what people pay at the counter—has eased in the wake of COVID-19, and many reforms to help biosimilars reach the market were connected to that movement.

COVID-19 Effects on the Marketplace

Among the trends Long sees:

Overall, Long said, COVID-19 could lead to “an overall decline in health,” as patients delay being seen for new conditions, and new treatments are not started.

On the plus side, the number of physicians using telehealth for the first time rose more than 3000%. Like other experts, Long sees the rise of telemedicine as a phenomenon that’s here to stay. “It’s going to be hard to put that back in the bottle,” he said.

In the weeks leading into lockdowns, prescription purchasing patterns shifted to more 90-day fills, as patients stocked up on drugs they would need for the coming weeks. Long spotted spikes in prescriptions for a pair of drugs being used in a COVID-fighting cocktail: choloroquines and azithromycin (Zithromax), the HIV antiviral ritonavir, as well as tadalafil, sold as Cialis. Thus, Long will be eyeing June prescription figures to see whether patients get refills when the 90-day supplies run out, or whether any shortages emerge. Right now, he said, the biggest shortages are in sedatives used by hospitals.

COVID-19’s long-term fallout won’t be fully felt for months or years, as clinical trials stall and companies opt to delay drug launches. In response to a question, Long said it wouldn’t be a surprise if FDA is forced to delay some approval dates under the Prescription Drug User Fee Act (PDUFA).

Specialty drug administration is down 64.8% from pre-COVID levels, but the rate varies by disease area: treatments for multiple sclerosis, diabetic retinopathy and declined far less than cosmetic procedures and vaccines. In-office contraception treatments are down 55%, and new fertility treatments have plummeted 70%, while those who have cycles to use are moving to complete them.

“Oncology is holding up much better than expected,” Long said, although he would not be surprised to see a shift to oral oncolytics.

COVID-19 has increased attention on social determinants of health, he said, as issues such as poor housing, low incomes, and lack of education factor heavily in medication adherence rates. The worst state for adherence is Mississippi, followed by Texas; neither state has expanded Medicaid.

The unknowns in managed care pharmacy abound. When will people go back to work? How quickly will we recover? Both are hard to answer, especially with IQVIA’s own projections of a nationwide peak in the virus ranging from April 30 to May 11.

And then, there is the biggest unknown of all: “Will there be a second round of this in the fall?” 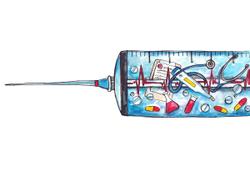