A recently published commentary examines the global multiple sclerosis (MS) drug market from the perspective of patients and physicians, noting that different regulatory bodies have different standards in place for approvals, and questions if safety concerns are being addressed.

Seventy-one percent. That is how much the value of the global multiple sclerosis (MS) drug market is expected to expand between 2016 and 2025: from $16.3 billion to $27.8 billion (USD). Costs per patient per year (PPPY) have risen, too, almost 7X over the past 20 years. Between 1993 and 2014, PPPY costs rose from $9000 to $60,000 (USD). Biosimilars, less expensive but having equivalent efficacy to their innovator biologics, can alleviate some of this spend. However, is the pharmaceutical industry putting patient safety at risk by rushing MS biosimilars to market?

That is the issue at heart in a recent commentary in the journal, Neurology and Therapy, by Victor M. Rivera, MD, FAAN, distinguished emeritus professor and founder and inaugural director, Maxine Mesinger MS Comprehensive Care Center, Baylor College of Medicine. Rivera, now retired from active direction of the center, focuses much of his time on MS education.

Rivera decries the societal and economic impact of MS costs and how biosimilars are approved, in his opinion, without hard (ie, trial results) proof they actually are similar to their innovator biologic medicines, or are even cost-effective. In Iran, for example, where 101.19 persons per 100,000 have MS, locally produced biosimilar interferon 1-a and 1-b were approved by the country’s Food and Drug Organization based on limited study results.

“The main priority should always be the protection and well-being of the patient irrespectively of therapy availability or pharmacoeconomic issues,” Rivera noted. “Theoretically, an ideal licensing acquisition would be that each proposed medication presented by the developer or the manufacturing company to the responsible authorities, should provide significant efficacy and safety results based on evidence, obtained through appropriate basic studies and well-designed clinical controlled trials.”

However, he sees the pharmaceutical industry motivated by money above all else, due to “loose national and international legislative control” that has raised the eyebrows of the MS field.

This issue seems to be an especially concerning issue in Latin America. At present, 9 follow-on β-interferons are vying for a share of the market against 3 interferon innovator products, Rivera notes. And their approvals have gone largely unchallenged by any regional licensing agencies. Just Brazil, Chile, Colombia, Panama, and Venezuela have legislation regarding biosimilars. In contrast, no MS biosimilars have been approved by the FDA, European Medicines Agency, the Japans Pharmaceuticals and Medical Devices Agency, or the UK Medicines and Healthcare Products Regulatory Agency.

“The patient’s well-being and safety remain as the fundamental principles in treating MS,” he emphasizes.

Other articles over the past year have suggested that some studies generally undertaken to facilitate biosimilar approval are unnecessary or even unethical in nature. 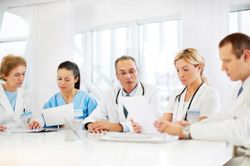 What Should Educational Materials Include to Instill Confidence in Biosimilars?