No Higher Risk of Cancer for Patients With Psoriasis Treated With Biologics, Analysis Finds

February 19, 2020
The Center for Biosimilars Staff

The review found no increased risk of cancer when looking at both keratinocyte cancer and lymphomas in patients on biologics vs conventional therapy. Overall, however, patients with psoriasis appear to have a slightly increased risk of certain cancers.

The systematic review and meta-analysis, published in JAMA Dermatology Wednesday, consisted of 112 studies incolving over 2 million patients. Overall, the review found that the prevalence of cancer in patients with psoriasis was 4.78% (95% CI, 4.02%-5.59%), with an incidence rate (IR) of 11.75 per 1000 person-years and a risk ratio (RR) of 1.21.

As with a similar meta-analysis published in 2013, this review showed a similar link between psoriasis and cancer. The 2013 study found an association between psoriasis and cancer excluding keratinocyte cancer, keratinocyte cancer, and some solid cancers, including respiratory tract and urinary tract cancer. Besides the link with skin-related cancer, the current study found a link with bladder cancer and lung cancer. The authors noted that their analysis is larger, with twice as many studies and newer trials.

Since 2013, the use of biologics for psoriasis, which do list certain cancers as a possible adverse event, has increased, the authors said. But whether biologics have an independent risk of cancer has not been known.

The prevalence of overall cancer in patients using biologics was 3.85% (95% CI, 2.69%-5.20%). The IR was14.11 (95%CI, 10.08-18.80). The authors included 3 studies, made up of more than 12000 patients on biologics in the risk analysis. Compared with patients receiving conventional therapy, no increased risk of cancer was seen (RR, 0.97; 95% CI, 0.85-1.10). Specifically, there was also no increased risk of cancer when looking at both keratinocyte cancer and lymphomas in patients on biologics vs conventional therapy and in fact appeared to slightly decrease when excluding keratinocyte cancer.

The overall prevalence of keratinocyte cancer in patients with psoriasis was 2.55%, with an IR of 4.35 and an RR of 2.28. Results could be explained by patients with psoriasis having a high exposure to sunlight and psoralen-UV-A (PUVA) treatments. Many patients with psoriasis often spend more time in the sun and have been treated with UV-B irradiation and tar, 2 factors known to increase the risk of developing keratinocyte cancer. However, a previous study from Denmark that adjusted for cofounders, including PUVA treatments, still found a small but significant increased risk, indicating that other factors may play a role.

Elevation in risk for lymphoma in part can be explained by an increased risk of cutaneous T-cell lymphoma (CTCL) in patients with psoriasis. Four of the reviews included studies did a separate analysis on CTCL and non-Hodgkin lymphoma excluding CTCL, all of which found the risk of CTCL to be highly increased for patients with severe psoriasis. Another explanation is that persistent immune activation in these patients could lead to the development of a dominant T-cell clone.

Psoriatic arthritis was not associated with an increased cancer risk, but that data is limited and needs further research, the authors said. Likewise, they wrote that future research is warranted on biologics, saying the long-term safety of these drugs is limited. In addition, the results as they pertain to biologics might be subject to selection bias, since patients using these therapies are screened and selected. 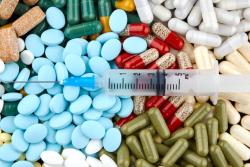