March 15, 2017
The Center for Biosimilars Staff

Patients treated with humanized monoclonal antibodies (mAbs) do not tend to have adverse events (AEs) to the treatments and, when they do, they are mild, reported researchers presenting their findings at the 2017 annual American Academy of Allergy, Asthma, and Immunology (AAAAI) meeting in Atlanta, Georgia, on March 5.

“We wanted to characterize the hypersensitivity and infusion reactions that cause a change in the treatment of patients receiving mAbs,” explained Dasha Roa-Medellin, MD, a physician in the Department of Allergy at the Hospital General Universitario Gregorio Maranon, Madrid, Spain. “The real incidence of [these reactions] is unknown,” she added.

Given that biosimilars for mAb treatments, themselves biologic in nature, are considered by many experts in the field to represent a sustainable, financially-viable, treatment-crucial option for the future of “treating life-threatening conditions in all disease areas.” In their article published in the European Society for Medical Oncology (ESMO)’s Open Cancer Horizons journal, the authors write that mAb treatments are relatively rare, seldom necessitate treatment modifications, and are relatively easy to respond to, all of which is highly promising for the biosimilar research space. mAb treatments are particularly common in oncological therapies, where many patients must deal with compromised immune systems on an ongoing basis. The lack of allergic reactions, overall, to the mAb treatments is promising for biosimilars such infliximab, which was included in the AAAAI study.

Roa-Medellin and her research group conducted a retrospective study that included 5833 patients treated with mAbs between January 2010 and December 2015 at a “third-level hospital” in Madrid, Spain, with a special focus on treatment modifications that were a direct result of AEs to mAbs. That focal study group had a population of 119 patients who either had an infusion reaction or a hypersensitivity reaction following treatment with their specific mAb.

There were 12 mAbs in the study group, 3 of which dominated the AE results: infliximab (61 AEs), rituximab (28 AEs), and adalimumab (12 AEs). The research team characterized the AEs by symptom, as cutaneous, respiratory, glottis edema, cardiovascular, neurological, gastrointestinal, lumbar pain, or fever. A majority of AEs were mild or moderate and responded to premedication with antihistamines, corticosteroids, or acetaminophen or a change in the mAb used for treatment, they noted. Six of the AEs required desensitization, “but all of the procedures were finally tolerated,” said Roa-Medellin.

Based on the results the authors concluded that mAbs cause a low incidence of AEs that require treatment modification. “The reactions represented only a tenth of the cases in which the treatment needed to be changed,” they explained, noting that anti-TNF α was the most-commonly involved MoAb in the reactions. “Premedication seems a good option for mild to moderate reactions,” Roa-Medellin said, and added that her team believes desensitization to be a good first option in the event of severe reactions “or when premedication is not successful.”

Note: Thirteen out of 48 desensitizations in the study had mild reactions of urticaria and/or pruritis. Only two had both, but both of those received infliximab. 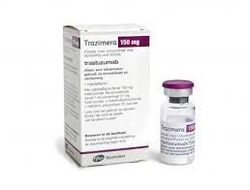