After noting the stories of individuals with diabetes dying due to their inability to afford insulin, the Minnesota House has passed an emergency insulin bill that is expected to move rapidly through the Senate to the governor’s desk.

Although the FDA is hoping a new biologics approval pathway will lead to insulin biosimilars, higher production, and lower prices, and thereby alleviate a crisis of insufficient supply, Minnesota is taking matters into its own hands.

An emergency bill that would create a statewide insulin assistance program for Minnesotans is on the way to the Minnesota Senate and is expected to pass before going to Governor Tim Walz’s desk for his signature.

The Alec Smith Insulin Affordability Act is named after a man who aged off his mother’s policy and died in 2017 at age 26 because he could no longer afford the $1300 per month he needed for insulin and supplies. It passed Tuesday in the Minnesota House 111-22. The bill’s proponents have noted other Minnesotans who have died from insulin rationing.

In March the FDA enacted a new regulatory pathway under which it anticipates competitor biosimilars for established insulin products will emerge. A 10-year transition built into the Biologics Price Competition and Innovation Act of 2009 allows for the biologics pathway approval of insulins and other drugs previously classified as small-molecule drugs and regulated under the Food, Drug, and Cosmetic Act.

“Thanks to the advocacy of thousands of Minnesotans, and to Representative Michael Howard’s dedicated leadership, this legislation is on its way to the Governor’s desk,” said House Speaker Melissa Hortman.

For those who cannot afford their insulin and are facing an emergency need, the bill would provide those with diabetes access to an emergency 30-day supply at their pharmacy for a co-payment of $35. The bill would grant eligibility to the uninsured, underinsured, Medicare beneficiaries, and those whose co-pays are not low enough.

Patients with diabetes would also be connected with options for long-term, affordable insulin coverage.

Under the bill’s provisions, manufacturers would be liable substantial fines for failure to comply.

“Lives are on the line—we can't let 1 more person lose their life because they can't afford the medication that keeps them alive,” said House Majority Leader Ryan Winkler, who blamed greed for the current prices of insulin, which have tripled in Minnesota in the past 10 years.

The bill will be funded largely by a fee on insulin manufacturers. 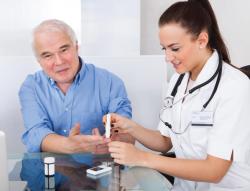