Bevacizumab is a monoclonal antibody that targets vascular endothelial growth factor (VEGF). It inhibits VEGF from binding to cell surface receptors to limit tumor vascularization and tumor growth. Bevacizumab is approved in the United States and EU for treating metastatic NSCLC, in combination with chemotherapy.

Several bevacizumab biosimilars are available on the US and EU markets, and CT-P16 has demonstrated pharmacokinetic equivalence to the reference product. The current study is an ongoing randomized, double-blind, parallel-group, phase III trial conducted across 164 study sites in 21 countries. The authors have published data for the first part of the study, which includes data up to 1 year of follow-up for the last patient enrolled, and said that full data for the entire study period will be published after the study is completed.

Patients (n = 689) with stage 4 or recurrent nsNSCLC were randomized to receive the bevacizumab biosimilar candidate CT-P16 or EU reference product combined with paclitaxel and carboplatin chemotherapy for up to 6 cycles as induction therapy. Patients with controlled disease after induction therapy then continued maintenance therapy with the same drug. A total of 499 patients completed the induction period, and 466 (n = 239 in the CT-P16 group; n = 227 in the originator group) entered the maintenance therapy period.

Computed tomography scans to evaluate response to therapy were conducted multiple times throughout treatment. According to the authors, the baseline characteristics, medical history, and previous treatments between the two groups were “well balanced.”

The authors said the approximately 42% ORR in both treatment groups was “comparable” to historical clinical trial data on reference bevacizumab with paclitaxel and carboplatin. They added that a similar proportion of patients in each group achieved a complete response (CR; 0.6% in the biosimilar group and 0.9% in the originator group) or partial response (PR; 41.8% and 41.2%, respectively).

The most common TEAE of special interest was hypertension, occurring in 12.8% of patients in the biosimilar group and 11.3% in the reference product group. Most were of grade 2-3 in severity.

Regarding immunogenicity, 22.6% and 24.1% of patients were positive for antidrug antibodies at any time during the study in the biosimilar and reference product groups. The authors said the proportion of patients positive for neutralizing antibodies was “low and similar between treatment groups” (2.3% in the CT-P16 group; 2.3% in the reference product group).

The authors concluded that CT-P16 demonstrated equivalent efficacy and similar pharmacokinetics, safety, and immunogenicity to the reference product in patients with nsNSCLC after 1 year of follow-up. They added their results also suggest comparable survival outcomes, pharmacokinetics, safety, and immunogenicity. As the study is ongoing, they said, “full data for secondary endpoints due to be assessed during the whole study period, as well as longer-term safety data, will become available upon study completion.” 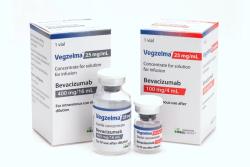