Biosimilars in the United States: Where We've Been and Where We're Headed

Earlier this year, The Center for Biosimilars® staff sat down with our editorial advisory board member, Ivo Abraham, PhD, RN, director of the Center for Health Outcomes and PharmacoEconomic Research at the University of Arizona Cancer Center. In the interview, Abraham discussed how biosimilars have progressed in the United States over the past year, whether biosimilars are indeed delivering on their promised cost savings, and challenges that still lie ahead in the cancer space.

Earlier this year, The Center for Biosimilars® staff sat down with our editorial advisory board member, Ivo Abraham, PhD, RN, director of the Center for Health Outcomes and PharmacoEconomic Research at the University of Arizona Cancer Center.

In the interview, Abraham discussed how biosimilars have progressed in the United States over the past year, whether biosimilars are indeed delivering on their promised cost savings, and challenges that still lie ahead in the cancer space.

This interview has been edited for length and clarity.

The Center for Biosimilars® (CfB): When you look at how biosimilars have progressed in the United States over the past year, are there any big developments that stand out to you?

Ivo Abraham (IA): Well, the biggest one is the FDA guidance on interchangeability of biosimilars. There are some very encouraging signals in that. First of all, it is less restrictive than what we feared it would be. If you looked at the draft a couple years ago, they were quite restrictive, and they actually did not bode well for biosimilars in the United States. The emphasis here is on clinical results. Obviously, there is all the research that has to be done to show that from a physiochemical point of view, the biosimilar is indeed similar to the reference product. But here, the FDA, much to the benefit of patients and clinicians, puts the emphasis on the clinical results.

And why is that important? That has to do with payer systems. It may be that a clinician starts a patient on the reference product, and then comes to work one day and is being told, “By the way the pharmacy is now purchasing a biosimilar equivalent.” That physician can tell the patient, “This is [an] FDA-approved product, it is similar to the reference product, so we can switch you off without more risk than there would be with the reference product.” So that's a first point.

The second point is a little bit more of a concern: That is the crowding of biosimilar agents, when at the same time, the reference products’ manufacturers are dropping their prices. We've seen that in Europe, where it often came down to a few pennies between the reference product and the biosimilar, especially with tenders. We have to ask ourselves, how much room is there for biosimilars?

Now, back to a positive. What’s also very encouraging is the uptake by providers and payers. What is particularly encouraging is that the lead comes from the community cancer centers in the United States. At academic centers—and I'm at an academic center—there is still a little bit of the sense of “It just cannot be as good as the originator product for us.” My colleagues are forgetting that a reference product today is not the product it was 15 or 20 years ago. It's actually probably a bit of a biosimilar.

And what is also encouraging is that organizations like the Association of Community Cancer Centers really is educating its membership about biosimilars and the use of biosimilars, and they're taking very active lead there.

CfB: So how encouraged should we be with the progress that we're making with biosimilars and achieving a cost savings in the US context?

I would say, having worked in biosimilars since one of the first in Europe, that I see growing enthusiasm in the United States, and I'm increasingly more enthusiastic that actually, in 2 years, we have made very significant progress in the science of biosimilars and in market access for biosimilars.

Savings are important, but even more important is what we do with those savings. We did the early studies on cost efficiencies. There was no rocket science: If you have a product that is cheaper than another one, you show that you're going to achieve savings. And that was important to show at that point in time, so that at least there was something in the literature that people could refer to.

But I want to talk a little bit about my group’s work in that regard. We took it a step further and said, providers and payers and are going to save money now by converting to biosimilars, so what should they do with the savings?

If you're an investor-owned insurance company, it’s going to go back into the big accounts, and you're going to try to show that you're providing a benefit to your shareholders. We took a different stance and said, on a budget-neutral basis, how do you convert those savings into expanded access to some of the newer, still branded, still patent-protected treatments that are increasingly becoming very, very expensive?

If you're going to save $10 million or $50 million, how can you use that $50 million and how many patients can you provide with care with some of the newer treatments? More recently, we've tried to better clarify how this could fit, and could really be beneficial to, centers that now are in preliminary phases of the OCM, the Oncology Care Model.

How can biosimilars and conversion to biosimilar agents not only save you money, but also do better on your OCM metrics by perhaps not buying more of the expensive drugs for patients? For some, you may do that. For others, you may say, “Okay, I'm going to provide more patient-centric services.” We know patients have problems with transportation, especially in rural areas. There are patients who have food insecurity; is there a way of accommodating that with savings generated by biosimilars?

A second point that I would like to make is, if you look at the economics of biosimilars, the traditional methods of pharmacoeconomic analysis are not going to help us. What is the benefit of trying to calculate the quality-adjusted life year [QALY] based upon using a biosimilar? We know the answer is going to be that it’s a little bit cheaper per QALY achieved or per life year achieved. Where we should put emphasis economically with biosimilars is on value. How much outcome is achieved per amount spent? And we haven't done that.

You see that the biosimilar makers—and I've tried to argue against that with them—are trying to resort to traditional pharmacoeconomic analysis as a way of trying to fit in when that is not where the issues are. The payers are not asking for that, either.

Then the third point that I'd like to make is that biosimilars are a helpful and responsible way of providing the same quality of care at the lower cost. That is where part of the value comes in. First of all, we can provide the same quality of care, most likely the same outcomes. And we can do that at significantly lower cost, which as I said, provides opportunities for additional ways of allocating those funds.

CfB: What are some of the challenges that we still have facing biosimilars, particularly in the oncology space?

Well, the first one is something I've been saying for over a decade now, and that is credible trials. And by that I do not mean better trials, but it's a matter of credibility. I want to be very careful, and what I'm going to say may sound a little negative negative, but why did it take time initially in Europe and then in the United States for biosimilars to gain traction? The trials were not published in high-end journals. Journals were not really interested at that time. Now they are; now you see biosimilar trials in the Journal of Clinical Oncology, for instance, but then also not only published in credible journals, but also conducted incredible centers.

That is of concern because the question is: Where does that reluctance and resistance come from? If you talk to them, and I've spoken quite extensively to them, you get the slogans, you get the lines that are fed to them that are very general. And when you challenge them by saying, “You know, an epoetin alfa today is not what epoetin alfa was in the 1990s. It has changed,” that's pooh-poohed, to be frank.

What is also concerning to me is totally on the opposite end of physicians: the patients. We see a lot of the messages about biosimilars being repeated by patients and being repeated by patient advocacy organizations. That's where an organization like Center for Biosimilars® could indeed be very, very helpful in working with a patient advocacy organization on giving them the education that is required. Objective, factual information at a level that general public can understand.

Now, looking into the future, will we be able to make biosimilars of all of the current and pipeline cancer treatments? Pembrolizumab is going to be a big success story. But what about treatment for the highly targeted, what I call “near-orphan” cancer types, or ones that are very specifically associated with very specific mutations?

The cost of development and market introduction of biosimilars, when there may only be 20,000 new cases in the United States or in the European Union, and you have to carve out your niche among them, that will be a challenge. How that will be possible from a cost point of view is unclear now.

One hopeful signal in that regard, again in the United States and maybe Europe will follow the lead there, is if you look, for instance, at pegfilgrastim: Only phase 1 trials are required, and all other conditions being met having been met, you may get your product approved.

I remember actually there was an American Society of Clinical Oncology meeting several years ago. We talked about this phase 1 only [approval], and it's a bit ironic: I thought I was going to get carried out of the room because of saying such heresies.

For relatively simple biological agents, I think that's a totally acceptable approach. By the same token, I also agree with the approval pathways for rituximab that, if you want it for rheumatoid arthritis, the mechanism of action is different than in the oncology hematology space. So there yes, you need to pursue that indication separately.

CfB: Did you have any last thoughts that you wanted to share with us?

The first one, and is this a general problem in clinical trials in oncology and hematology, we don't have enough patients who consent to being in trials. That creates the temptation of going into markets that don't have as much experience and where a trial agent becomes a way of providing access to patients. We need to separate those 2 things.

So, will we have the patients? And will we have the sites to do biosimilar trials? Academics are going to be less enthusiastic about it because they want to be involved with the big trials on the new agents. Those biases do exist, unfortunately.

A second final thought is: We'd like to have, in the United States and in Europe, the best possible care. In the United States, we're proud of research and development [R&D]. We are the R&D leaders in in oncology and hematology.

Apart from the fact that there is some truth to pricing issues, we need to take into account that we need to make good—and moreover, safe—drugs. It takes a lot of effort from the very early stages through the very last postapproval study that is conducted. 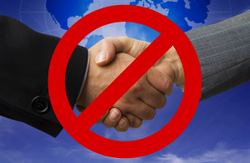